Blog
You are here: Home / Blog / Membership Only / Social Media / Marketing With Pinterest

The social media site Pinterest has over 11.7 million visitors a month now, and about 17.8 million registered users! It has become one of the most popular social media sites for a few main reasons.

The visually appealing aspect of the site draws in viewers and keeps their attention. The fact that users sign into the site using their Facebook or Twitter account allows them to be automatically integrated into their existing social network sites. So, sharing across social media sites is already built into Pinterest. The site has a clean and simple interface, so people are able to use it easily, with little confusion.

However, compared to other leading social media sites, Pinterest does not offer as many discovery methods. It can take a little effort to trace a pin to the user who initially pinned it, making it somewhat harder to directly engage with fellow users. Pinterest also does not yet have a way of recommending or directing pinners to other pinners or boards based on activity. This can be a little inconvenient for brands trying to build and grow an audience.

For companies who have passionate followers across several platforms, like Facebook, Twitter and YouTube, you can bet that those followers will also engage with your brand on Pinterest. Pinterest can be a great site to engage on a personal level with followers because you share your own, personal interests with your users. While the site clearly helps build relationships, it is not so efficient in “selling” products to followers. But, remember that engaging, not selling, is the ultimate goal of social media!

Pinterest is also a great platform in terms of sharing. You can easily post pictures from your own site, or pin images from other sites. A “Pin It” button can be installed on the Safari browser, making sharing images and information across the web easier than ever. You can also place a Pinterest button that links to your Pinterest account on your website or blog. Facebook even allows you to add a Pinterest tab onto your timeline.

The fact that fans can pin your images onto their own boards is another way that fans engage directly with your brand. You can use the “Pin It” button next to images on websites that you would like to share with your fans. This provides a chance to make viral connections, as followers of your fans will see their pins.

Additionally, there are a few apps available to help you to build a community on Pinterest. The app, Shareasimage, converts text found on the web into an image that can be shared on Pinterest. The app also works for Facebook and Twitter. Another app, Url2pin.it, lets users “screenshot” a picture of a website then share it on Pinterest. This could be a great way to share interesting sites with your fans, or it could be used as a promotional tool for your own site.

Pinterest is a site that truly models the purpose of social media: to be social! The site does not sell; it shares. Sharing with your consumers is how you must market with social media in order to gain brand loyalty and expand your fan base! 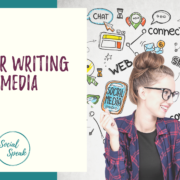 Tips for Writing Social Media Posts
How to Use Social Media to Promote Your Event
Need Ideas On What To Tweet?
0 replies